» How to avoid cavitation for model boat propellers

Yesterday at 4:26 pm by Hermann 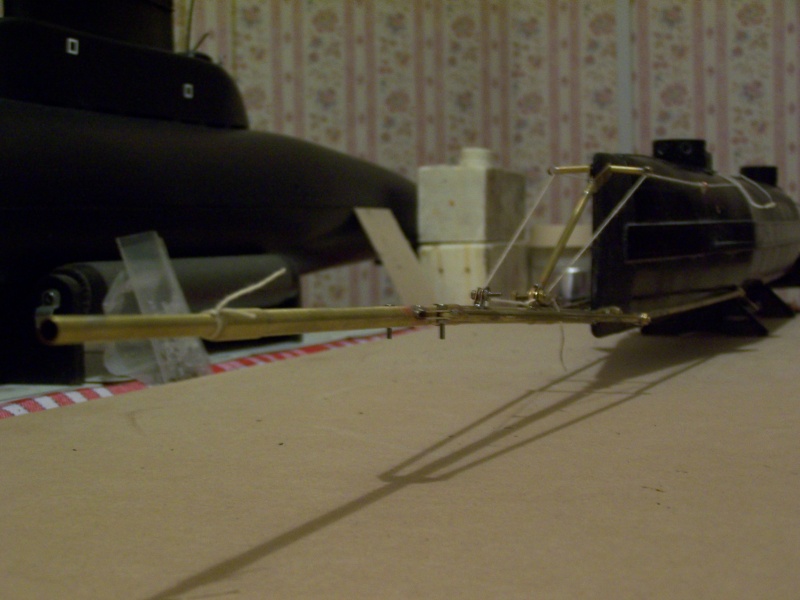 Spar in down position.
nigele(ADMIN)2 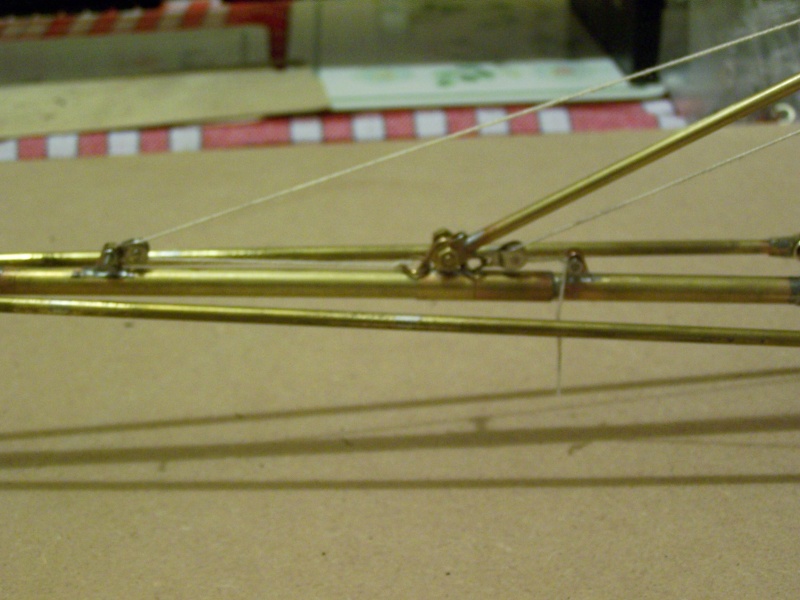 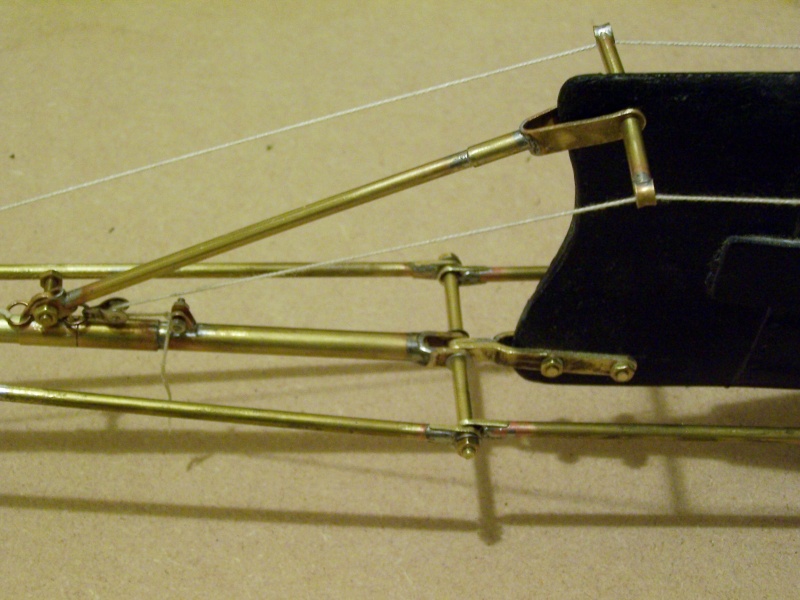 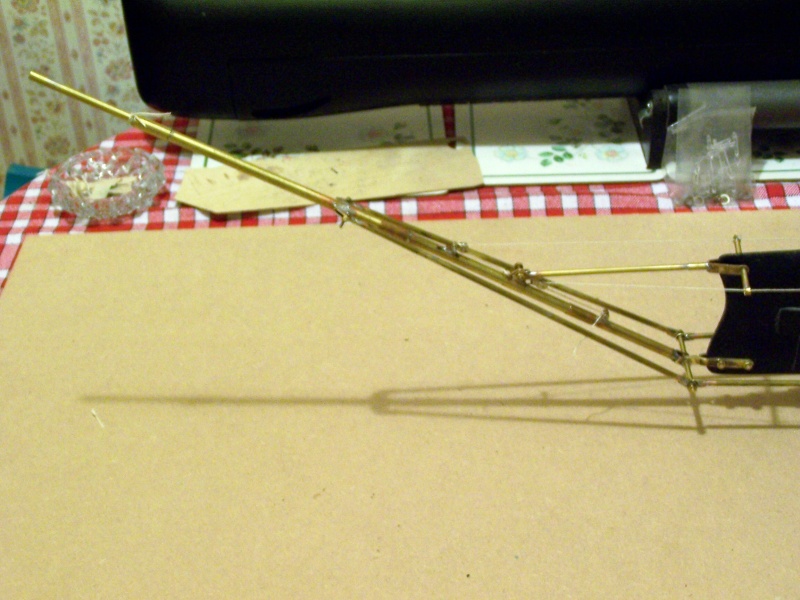 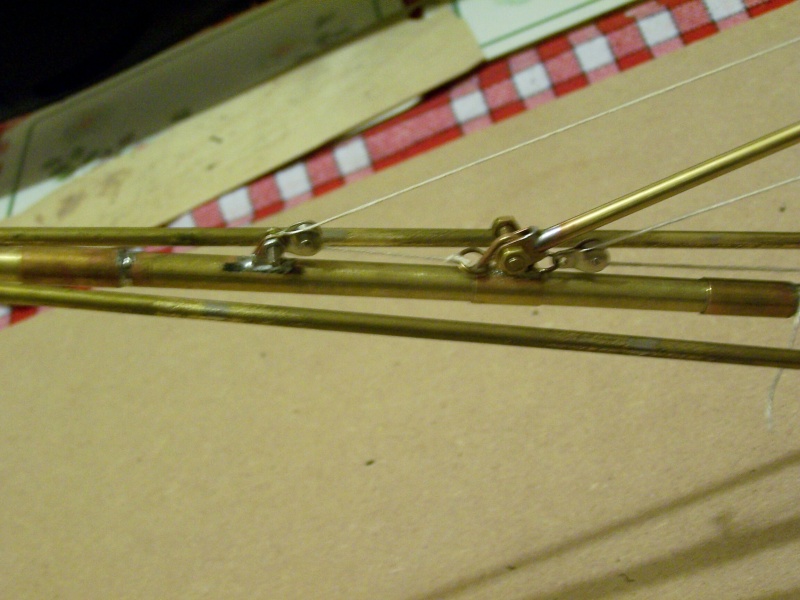 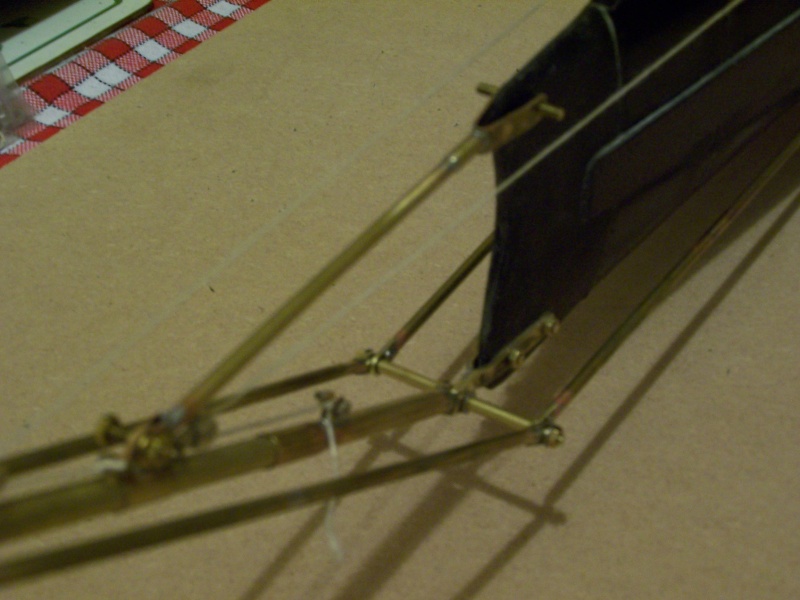 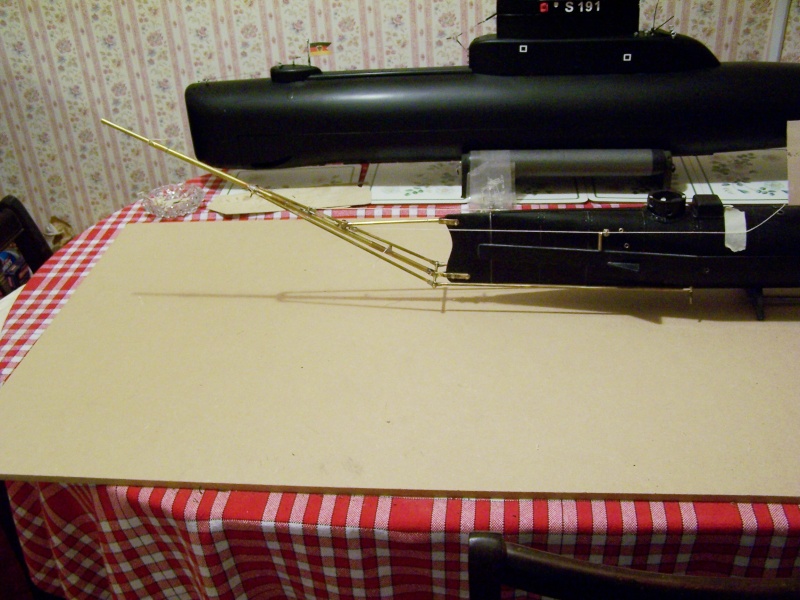 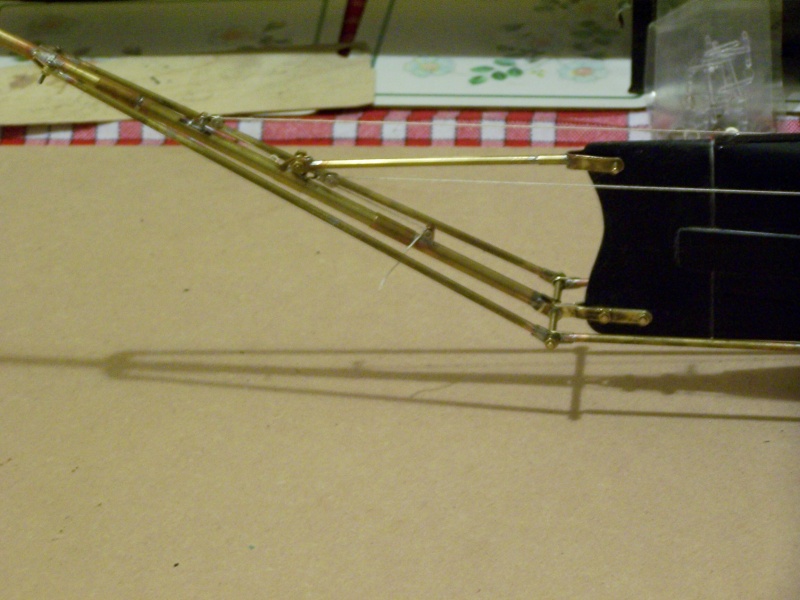 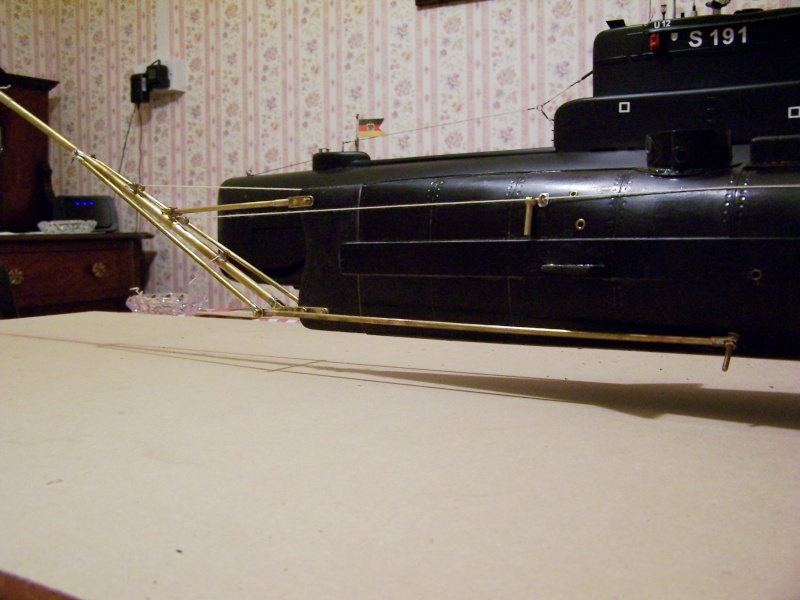 I see what you meant on the phone, Nige...that looks like really good fun. Are you intending to have the spar controllable by radio?
david f

A submarine with sail winches.

I would pay good money to see that!

Giovanni wrote:The articulated rudder is really a marvel of engineering !
I'm lusting after this model. Hoping you may offer some kits ?

Sorry Giovanni,I forgot to reply to your post,ask me again when I am happy that it works ok,I dont do kits but once I feel that it works properly I most certainly would supply you with a set of mouldings and castings.nigel

Thank you Gent's you are to kind,its nice to know that I am not the only nut that loves these early submarines.
Giovanni LiCalsi

Thank you Nigele.
This is a very interesting build.
Love this vintage era of submarines.

On the face of it this would seem to be a reasonable interpretation, but having thought about it a great deal I am not so sure it was quite so simple. If you take the idea of a straight spar sticking of the lower bow of the boat, bearing in mind that the spar was 20ft long, it would make the lanyard some thirty feet long,it would have had to wind its way along the spar and along the hull to the cotton reel. This seem's to me to be at best highly dangerous, it would only take a small piece of drift wood to get caught up in the lanyard to pull the trigger on the canister, also the cotton reel itself sits behind the conning tower, and the pilot has no possible way to see if the lanyard is paying out. I then read a note from the friends of the Hunley saying that the cotton reel assembly seems to go through the hull via a stuffing box and shaft, with what looks like the remains of some kind of handle/wheel,this struck alarm bells with me...why would you possibly want to run a shaft through the hull via a stuffing box? The friction alone could cause the trigger to be pulled before the lanyard had payed out, and to compound the problem add a handle to the shaft,it would only take a few turns on the handle to trigger the charge, or even accidently stopping the wheel when the lanyard was paying out would have the same result, I just don't buy this.

So I decided to do a bit of research starting with the Hunley's attack and sinking of the Housatonic, and the subsequent loss of the Hunley itself.

Part 2 after dinner, I am starving.
Giovanni LiCalsi

Nigele,
Did you watch the History Channel special documentery on the Hunley.
It was very detailed and revealing.
Giovanni
nigele(ADMIN)2

This is the Captain of the Housatonic's account of the attack and sinking, it is born out by accounts from other crew members.

The first thing that struck me was how could the Hunley be within two or three feet of the ship, bow on when the spar is twenty feet long,the only explanation for this is that the spar was facing downwards towards the keel at about 35 degrees, given the rapid sinking of the Housatonic and the damage inflicted(the prop shaft was blown in half, the rudder was blown of its mountings, and according to many accounts, the magazine exploded and the ship sank by the stern in minutes)this would most likely seem correct,so this raises the question did the Hunley set sail on this attack with the spar facing downward by 35 degrees, I really have doubts about this,if the boat was to be bottomed the spar would be in danger of being buried in the mud with dire concsequences.

I hastily examined the torpedo; it was shaped like a large whale boat, about two feet, more or less, under water; its position was at right angles to the ship, bow on, and the bow within two or three feet of the ship's side, about abreast of the mizzenmast, and I supposed it was then fixing the torpedo on. I saw two projections or knobs about one third of the way from the bows. I fired at these, jumped down from the horse block, and ran to the port side of the Quarter Deck as far as the mizzen mast, singing out "Go astern Faster" (Ragan 1995, 136).

This is another account from a crewman on the Hunley that seems to give further evidence to the positioning of the spar during the attack on the Housatonic,but it still gives no indication whether the spar was fixed in position at the dock or could be moved from within the boat.

The manner in which the spar was rigged has been the matter of some debate. Lieutenant Stanton recorded his views on this subject as follows:

Lieutenant Payne, although a willing volunteer for this dangerous service, never at any time had faith in the success of the enterprise. I heard him say time and again that if he struck a vessel with the torpedo staff projecting horizontally, he feared the boat would enter the hole made by the explosion in the ship's side, and the machinery would not be powerful enough to back the boat out before it was carried down by the wreck. His idea was that if the torpedo staff was lowered to an angle of forty-five degrees when the ship was struck the torpedo would explode near the keel, and the Fishboat's bow, striking the solid planking of the ship, would recoil sufficiently to make the machinery effective in backing out of danger of being drawn down by the wreck. I have always felt very certain that the torpedo staff was in this position when the Housatonic was struck....(Stanton 1914).

Did you see the forensic reconstruction of the skeletal remains ?
The applied clay onto the bones and recreated their exact likeness. Truly uncanny !
Giovanni
nigele(ADMIN)2

This to me is the most informative document I have seen so far, this is on the day of the attack on the Housatonic, this seems to confirm my original belief that the spar is far more complex than generally thought, it refers to rods and machinery and getting them working properly, all in direct connection with the spar torpedo,and the Hunley was as stated underway whilst these adjustments were being made. This certainly adds creadence to my now firm belief that the spar could be raised and lowered from within the boat,and that it was supported by steel rods.


On 17 February, Corporal Donald W. McClaurin of Battery Marshall, was summoned to the boat in order to make adjustments to the on-board machinery, during which time he made note of the Hunley's third and final torpedo configuration:

As I recall, the torpedo was fastened to the end of an iron pipe, about two inches in diameter and twenty to twenty-five feet in length, which could be extended in front and withdrawn at ease by guides in the center of the boat to hold it in place.

Lieutenant Dixon landed and requested that two of my regiment, the 23rd South Carolina Volunteers, go aboard and help them to adjust the machinery, as it was not working satisfactorily. Another man and I went aboard and helped propel the boat for some time while the Lieutenant and others adjusted the machinery and the rods that held the torpedo and got them to working satisfactorily (Ragan 1995, 130).

Very interesting analysis. Putting the charge deep under the hull would always be more effective in destructive terms.

On a slightly whimsical note, can you imagine the Health and Safety issues of doing that sort of thing today?
nigele(ADMIN)2

david f wrote:Very interesting analysis. Putting the charge deep under the hull would always be more effective in destructive terms.

I don't think I would fancy the idea of a contact fuse much,if you where to accidentley hit something whilst docking or coming alongside the jetty it could get interesting to say the least. Originally the Hunley was fitted with a towed contact mine, but after a couple of incidents when they came close to sinking themselves, and another incident when they very nearly sunk the ship thats was towing them, they changed the boat to a spar torpedo. I think that these incidents might have coloured there view on any kind of contact torpedo, also there was the very real threat of placing the torpedo and not being able to back off quick enough to avoid being sucked into the hole that the torpedo had made. With the lanyard system the torpedo will not explode until the boat has backed of enough to pull the trigger, seems to me to be the safer option???
Go to page :