We are delighted to post another in-depth contribution from Hein Kistenich: 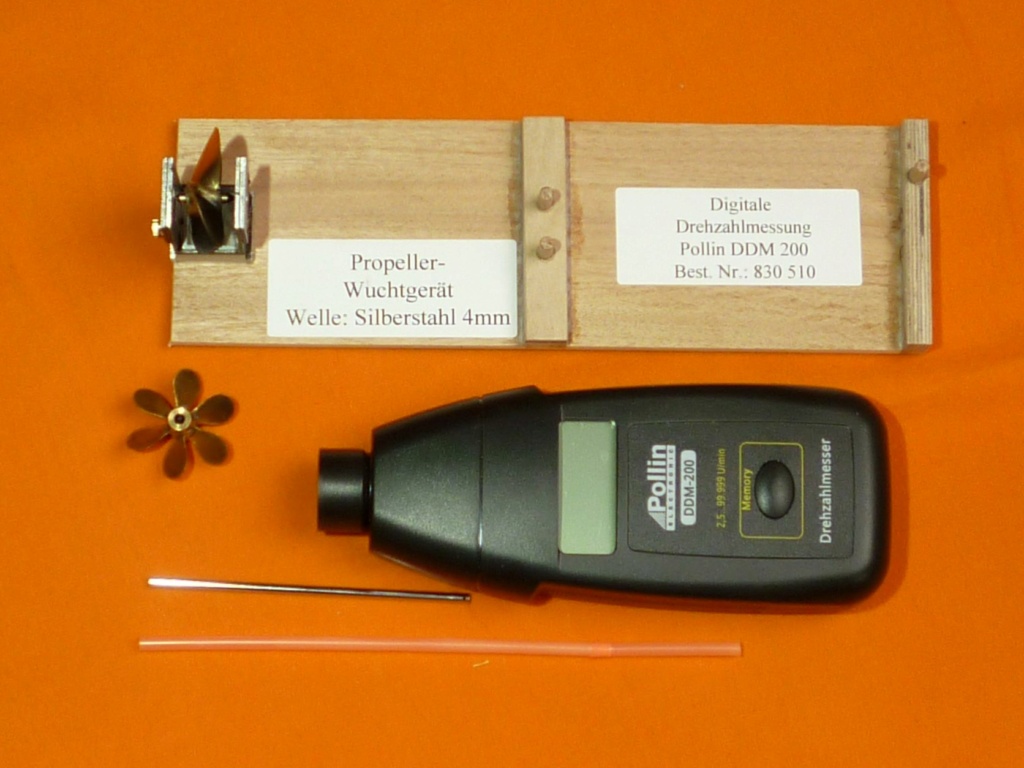 I would like to start with the following consideration: The propeller converts the energy of the motor into propulsion. Driving machines, in our case electric motors, are industrially manufactured parts that do not need any improvements. The situation is different with the propellers, which are often self-made. Optimizing them is worthwhile. This includes, on the one hand, the adaptation of the propeller to the motor.  I have also included two examples of what not to do.
Then it's about the "machine" propeller itself. As a rotating component, it is subject to the laws of centrifugal force, which - if present - is noticeable as an imbalance. The following  balancer aims to reduce this imbalance or even eliminate it entirely.

The balancer was created during the restoration of the SUSHI model .

The clever thing is that the propellor shaft hub is suspended between two magnets and so has very little friction.

The test hub is a silver steel shaft sharpened at both ends and is held in place by the two magnets. The stronger magnet only allows the shaft to rest on one side. A drop of oil on this bearing reduces the already low friction. The difference between before and after propeller balancing is amazing. Flexible  needle files with different grits have proven themselves as useful tools for balancing the props.

The low friction means that the propeller can be spun up to  high speeds with a compressed air jet. (Even blowing on the propeller through a drinking straw may be enough!)

The propeller revs per minute (rpm)  is measured  with an electronic rev counter.

My rev counter device from Pollin  sends a focused beam of light onto the rotating test object. There is a reflective mark on this (blackened) shaft. With each revolution, this mark reflects the beam of light from the meter, which is then shown on the display as revolutions per minute.

The balancer was constructed from a 50 mm long piece of aluminum square tube 25 x 25 mm and the walls were removed about 33 mm deep on two sides. The flaps that remained were doubled up with the waste material. Material of the same thickness was also placed on the foot. These pads are glued and riveted. Two 8 mm holes were drilled at the top, in each of which an 8 x 3 magnet was fixed. (See photos.)

This device can be used to test propellers up to a diameter of 56 mm and a hub length of no more than 20 mm.

Here are some logs of my trials:

K 3 model.
September 15th + 16th, 2021
On the 15th the port propeller was balanced. It took many hours.
Today, on the 16th, work with the starboard propeller went even faster.
The digital tachometer worked. At first, the propellers were powered by compressed air, but when the bottle ran out, lung power was used. However, I was by no means satisfied with the result, because in my "flying" setup not only the reflective mark on the propeller hub was measured, but sometimes the shadows cast by the propeller blades were also counted. I should repeat this work again under different conditions.
The purpose of this measure is to reduce the unavoidable residual imbalance (be it static or dynamic) to such an extent that the maximum speed of around 5,000 rpm to be expected during operation does not lead to vibrations in the shaft system.
If higher speeds can also be achieved without vibrations, all the better. But at least up to the limit speed, vibration-free operation should be possible.
The test hub is a silver steel shaft sharpened at both ends and is held in place by the two magnets. The stronger magnet only allows the shaft to rest on one side. A drop of oil on the bearing reduces the already low friction. The difference between before and after propeller balancing is amazing.Flexible  needle files with different grits have proven themselves as useful tools for balancing the props.
The vibration of the drive train in the SUSHI had almost completely disappeared after this "cure".

Pursued goal:
In the ideal case, the test object remains still at the end of the rotation without any after-oscillation.
The speed measurement:
My digital measuring device from Pollin (DDM = digital speed meter) sends a focused beam of light onto the rotating test object. This can e.g., be a wave. There is a reflective mark on this (blackened) shaft. With each revolution, this mark reflects the beam of light from the meter, which is then shown on the display as revolutions per minute.
In my measuring device, the reflective mark is located behind the propeller, which now interrupts the measuring beam sent out with each rotation. In order to get a correct measurement result, the number shown on the display must be divided by the number of leaves.
If propellers with a larger diameter have to be checked, an adapted tool can be created very easily based on this knowledge.

01/05/2022 Improvement of the measuring device
Today the SUSHI prop was improved again.
With another attempt to determine the speed of the propeller with my DDM, it quickly became clear that there was still a lot to do. So, a base board was prepared on which the DDM can be fixed. The magnet holder (test body) was mounted about 10 cm in front of the lens of the DDM in the focal point of the measuring beam. Before that, however, an 8 mm wide slot was milled vertically into the front. The holder heated up so much that the magnet above it lost some of its strength. This was replaced. The device was painted black (matt) on the front and also on the inside and a reflective foil was attached on the inside. The test specimen stands over a square base and is fixed with a screw.

01/05/2022 Measurement of the SUSHI propeller
Manufacturer: Prop-Shop (GB), Ø 48 mm, brass, trefoil, shape: St(andart) The speed of the SUSHI's propeller, which was set in rotation by blowing on a straw, could then be measured with the DDM. On a first try, the device showed 15,133 rpm. Dividing it by 3 gives around 5,044 rpm.
That is more than enough, because the new drive motor “only” reaches 4,200 rpm with the planned on-board voltage when idling.
In another test (blowing with compressed air), my colleague Wolfgang even reached a speed of around 30,000. He held the measuring device between his thumb and forefinger. The vibrations that occurred were barely perceptible.

Result: Because the vibration is negligible over the range between standstill and the speed to be expected in subsequent operation (4,200 rpm), nothing further is done at this point.
The propeller can now be used in the model!

Brief review of my experiences of the period 2000 to 2005.
It is hard to imagine what would have happened back then in the SUSHI with the old Hopf motor with its around 20,000 rpm and a (soft-soldered) Rabösch propeller. 2000 was the year my son Klaus lost his SUSHI.
In 2001, my colleague Nils first saw the soft-soldered propeller blades fly-off on his V 300 at the “Waschmühle”, a public bath near Kaiserslautern, and then, after he had found a replacement propeller somewhere, the Plettenberg machine fell apart on the next trip. Plettenberg www.info@plettenberg-motoren.com is a manufacturer of high-quality electric motors. Anyone who owned such an engine in the submarine model scene at the time was respected. His machine had a power consumption of around 1.000 watts.
Not unlikely that he got a cast and therefore more stable prop as a replacement. The prop was probably even stronger than the Pletti. (Plettenberg motor)
Luckily, an underwater sound recording was made before the accident, which - even many years later - keeps making the hairs on the back of my neck stand up.
A short time later, Nils reached a speed of 20 km/h under water with his V 300* (scale 1:30), now with a new engine and adapted propeller.

The same thing happened to our colleague Erwin, whose self-made prop had destroyed two beefy industrial engines from Bosch one after the other. The 7 crescent-shaped leaves come from curved brass carpet rails.
This prop has been on the Type 212 of colleague K.D.W. cloud. He can set up his (homemade) speed controller in such a way that the drive motor only draws as much current as his boss allows him. KDW did not change the pitch of the blades, but adjusted the power consumption of the motor to the propeller.

01/06/2022 Measurement of a K 3 propeller 6- sheet.
The unusable and therefore superfluous propeller of the K 3 (unusable because it was not properly brazed) reached a speed of 5,340 rpm in one test and even 5,790 rpm in another. Here, too, slight vibrations could be felt with the fingertips. 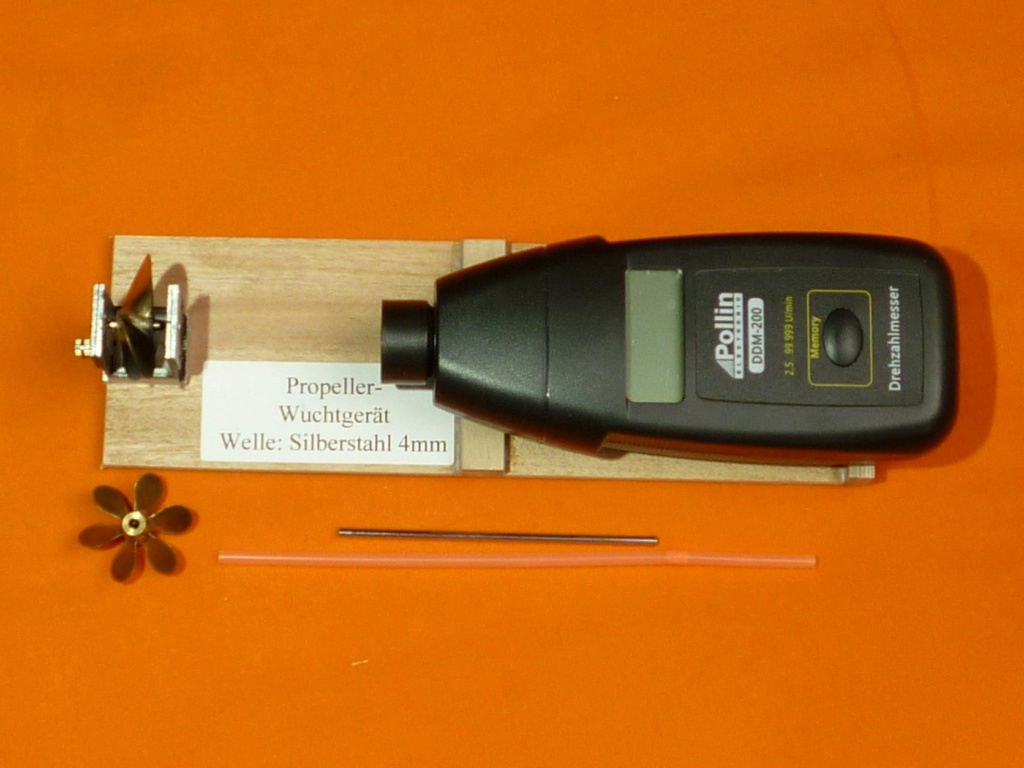 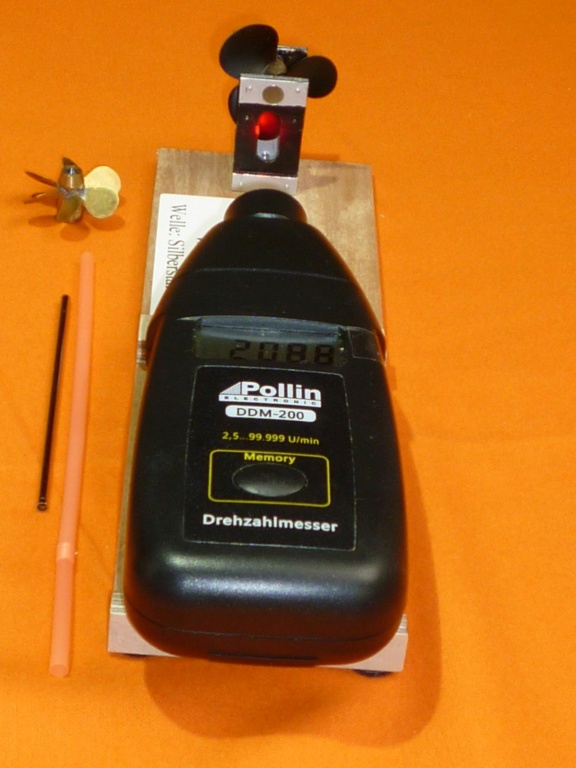 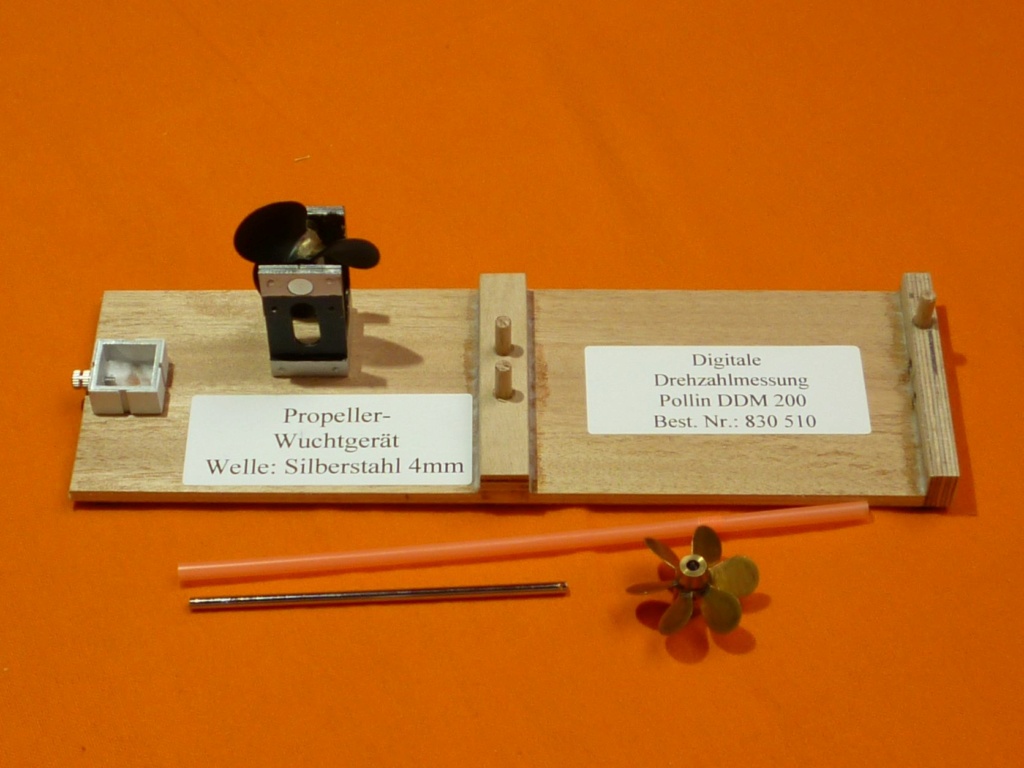 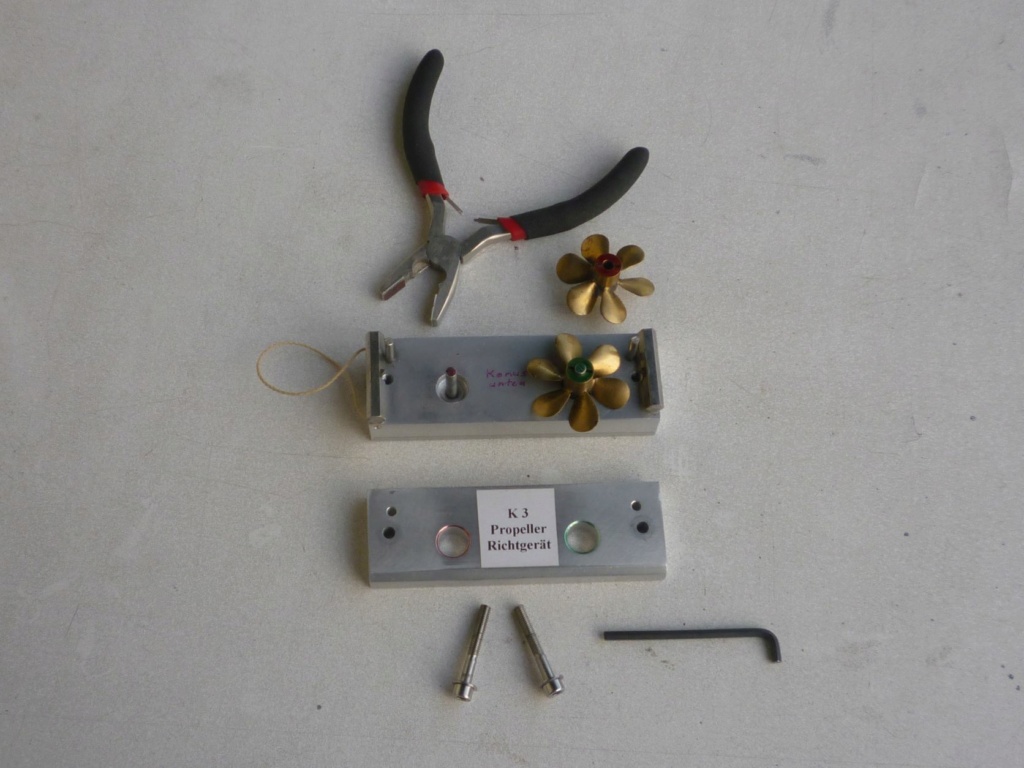 End Note:
For you fellow model builders, I am including some links to companies named in my "mental outpourings".
Coreless DC Motors:
https://www.maxongroup.co.uk/maxon/view/content/index
https://www.faulhaber.com/en/products/dc-motors/

Disc Motors:
https://www.baumueller.com/en/products/motors#top
Tip for the disc motor from Baumüller: I wasn't looking for this motor, the motor found me. At the beginning of the construction of STINT, a colleague gave me this example. We didn't know anything about the engine because there was no longer a nameplate. Only two boreholes reminded that something like this had once been there. Nevertheless, the engine was installed. Only after a few years did another colleague accidentally recognize this treasure and gave me copies of a prospectus. It turned out that I drive a 42 volt version in STINT. Life can be so beautiful.
High End electric motor manufacture
https://plettenberg-motoren.net/en/home