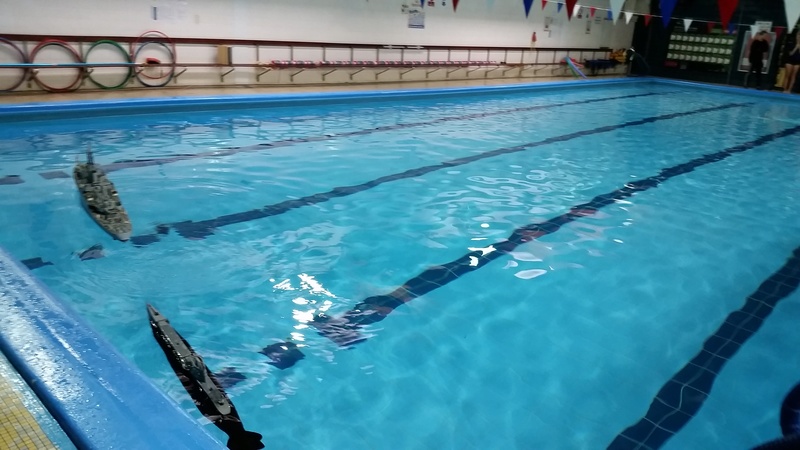 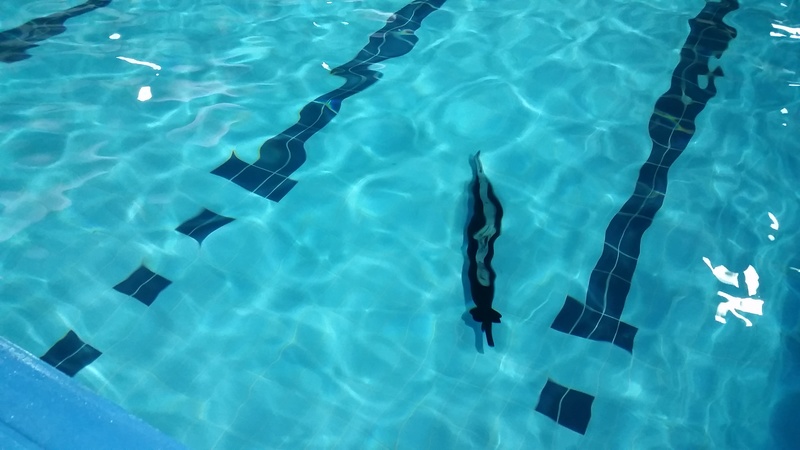 Just some notes about my first experience of using this technology in a UK swimming pool.

Overall the technology and the submarine worked well. There was no problem getting a trim in the warm and therefore less dense pool water.

However the sub was only just about under control at the shallow end (0.8 metre deep) but there was no signal at the deep end at 1.8m and so the sub relied on failsafes.

So the signal was not penetrating as well as it would in an open water pond, for example.

I did some investigation and took a sample of pool water for later analysis (pH and conductivity).

The pool water conductivity was about 660 micro Siemens/m with a pH of 7.5.
This compares with 61 micro Siemens/m (pH of 7.6) for our local tap water, for example.
Seawater has a conductivity of about 5 000 000 micro Siemens/m and this definitely blots out any signal. So you would expect the pool water to attenuate the signal to some extent. (Chlorine levels are sometimes blamed but these are never more than 3 parts per million and I can't see that this can be significant.)

Extra note dated 31/12/2017. On the way over to the pond at Barrow I took a sample of Morecambe Bay seawater.(7590 micro Siemens/m and pH of 7.7 - No surprises there really) But I also measured the Barrow pond water (455 micro Siemens/m and 8.2 pH) So a surprisingly high conductivity and quite an alkaline pH)

Conclusions: (2/01/2018)
The paper by Lloyd Butler (see references below) shows that attenuation of radio signals in water is proportional to frequency and water conductivity. openLRS technology is able to make the best use of these conditions by frequency hopping and use of data packets.

My experience is that it is suitable for use in swimming pools. (I'm sure that 40Mhz would also have worked well, by the way.)

However we should perhaps be paying more attention to the conductivity of the water in the ponds we operate our models in. I was surprised that the Barrow pond had a relatively high conductivity.
You can't do anything to change the conductivity of an existing pond but it may influence the ponds you choose to sail in. (Conductivity meters are now very cheap and portable - see the bottom of this post.)

The pH should be around 8.4 and the conductivity in the range of 2.5 - 3 mS/cm. The lower value is appropriate for freshly prepared water. The conductivity is used for the determination of TDS (total dissolved particles).

TDS or Total Dissolved Solids is the measure of the total of all the soluble substances dissolved in the water. It is usually measured by assessing the electrical conductivity of the pool water.

Distilled or pure water has a TDS value of 0 ppm. Drinking water can have a maximum TDS value of 500 ppm according to EPA Water Standards.

For regular fresh water swimming pools, the maximum recommended TDS level is 1,500 ppm. Values above this can lead to problems such as cloudy pool water, staining of the pool surfaces, scaling, hard water and a salty taste. TDS values of up to 4,000 ppm and more have been noted in some well-balanced pool water so the individual levels of total alkalinity, hardness, conditioner, pH and metals should be considered along with the general state of the pool and its chemical demand. The TDS value should be used as an indicator of the volume of soluble particles in the pool relative to that of the fill water used.

In swimming pools using salt-chlorine generators, the large volume of salt added radically increase the TDS level, so any measurements are redundant due to the addition of salt.

If the pool water has become saturated with contaminants and the TDS level confirms this, the pool should ideally be drained and refilled with fresh water. There is no method to reduce TDS effectively without replacing some or all of the swimming pool water.

The Truth about Chlorine in Swimming Pools
Water Quality & Health Council
May 27, 2016 — Leave a Comment
100 2 1Share1 0
This summer when you don your bathing suit and walk out onto the pool deck, you may be in for a sensory experience that conjures up happy memories of summers past—warm sunshine, sparkling pool water and the smell of chlorine.  If the chlorine smell is very strong, however, you may soon spot “red-eyed” swimmers emerging from the pool.  That’s when the pool water is assumed to have “too much chlorine” in it.  Ironically, a strong chemical smell around the pool and “swimmer red eye” may be signs that there is not enough chlorine in the water.  Sound confusing?  It’s time to set the record straight about chlorine and swimming pools.

Most swimmers understand that chlorine is added to pools to kill germs that can make swimmers sick.  Chlorine-based pool sanitizers help reduce swimmers’ risk of waterborne illnesses, such as diarrhea, swimmer’s ear, and various skin infections.  The great advantage of chlorine over other sanitizers, such as ozone and UV is that it keeps working long after it is added to pool water; chlorine provides a “residual” level of protection against germs in the water.  Chlorine is not the only “game in town” when it comes to pool sanitizers, but of the common products, only chlorine- and bromine-based disinfectants provide significant residual protection.  Salt-water pools, by the way, are chlorinated pools in which the chlorine is generated on site from sodium chloride.

It’s important to get the pool chemistry right

Pool managers strive to keep the “free chlorine” level of pool water between about one and three parts per million.  Maintaining the chlorine level in that range depends on several factors, including the pH of the water (it should be between 7.2 and 7.8), and the presence of unwanted substances in the pool, such as urine, perspiration, body oils and lotions, which compete with chlorine and react with it.  These substances add to what is known as the “chlorine demand.”

Products of chemical reactions between chlorine and substances added by swimmers are irritants known as chloramines.  It is chloramines, not chlorine, that are responsible for swimmer red eye.  Unshowered and unhygienic swimmers (read:  those who pee in the pool), add to the “chlorine demand” and are often the real cause of swimmer red eye.  Unfortunately, as chlorine reacts with impurities brought into the pool by swimmers, there is less of it available to kill germs.  So, not only do unhygienic swimmers promote irritants forming in swimming pools, they may also inadvertently raise the risk of waterborne illnesses.  More chlorine may be needed to chemically destroy the chloramines formed and restore a free chlorine residual.

This comes as a surprise to many swimmers.  The fact is that swimmer hygiene affects the chemistry of the pool and the comfort of swimmers.  Last summer we made the point that swimmer “red eye” is an indicator that someone might have peed in the pool.  That raised awareness and quite a few eyebrows.  This year, we join our efforts to those of the Centers for Disease Control and Prevention and ask swimmers to shower before swimming and never pee in the pool.  When you walk out to the pool this summer, sniff the air and decide whether or not you are about to jump into a healthy pool!

Underwater Radio Communication
by Lloyd Butler VK5BR
(Originally published in Amateur Radio, April 1987)
How far can we communicate underwater in the sea or in a lake. How large is the signal
attenuation and what Frequency can be used? Could we use 1.8 MHz? In the following
paragraphs, we attempt to answer some of these questions.
INTRODUCTION
One could ask why a radio amateur enthusiast might be interested in underwater cornmunications. Well, he could be
interested in diving and wish to set up a communications link with the surface, or perhaps he might be interested in radio
controlled boats and wish to try his hand at model submarines! On the other hand, he might just be interested in another
area of experimentation because here is a field, relatively untouched by the amateur fraternity, involving different
transmission techniques, different antenna designs and different equipment environmental problems.
The scope of this article concerns the transmission characteristics of radio waves underwater and the extent to which the
radio amateur might make use of these characteristics.
The article includes examination of the transmission options for what was lowest Amateur Radio frequency (1.8MHz)
when the article was first published. Of course, some countries now have an LF Amateur band and the lower attenuation
at LF now opens the options further.
WATER CONDUCTIVITY
Water in its pure form is an insulator, but as found in its natural state, it contains dissolved salts and other matter which
makes it a partial conductor. The higher its conductivity, the greater the the attenuation of radio signals which pass
through it.
Conductivity (s) varies with both salinity and temperature. Sea water has a high salt content and high conductivity varying
from 2 mhos per metre in the cold arctic region to 8 mhos per metre in the warm and highly saline Red Sea. Average
conductivity of the sea is normally considered to be about 4 mhos per metre. What this means is that one metre cube of
sea water has a conductivity of 4 mhos or a resistance of 0.25 ohm, (it's reciprocal).
So called fresh water has lower conductivity and as a guide to this, a sample analysis of Adelaide water taken in 1983
has been used. This sample was taken from an area principally supplied by the Barossa reservoir and the analysis shows
total dissolved salts as approximately 300 mg/litre and a conductivity of 0.0546 mhos per metre. How close this is to the
average waters in lakes and rivers in Australia is not known, but as it is the only water on hand, it has been used as a
reference.
ATTENUATION
Attenuation of radio waves in water (and, in fact, in any conducting medium) increases both with increase in conductivity
and increase in frequency. It can be calculated from the follow formula:
Attenuation (a) in dB/metre = 0. 0173 v(fs)
where f = frequency in hertz
and s = conductivity in mhos/metre
Figure 1 illustrates attenuation as a function of frequency for sea water and Adelaide water. Attenuation in sea water is
very high and to communicate at any depth at all, it is necessary to use very low frequencies (10 to 30 kHz) where
attenuation is in the order of 3.5 to 5 dB per metre. Operation in the lowest frequency amateur band (1.8 MHz) is out of
the question at 46 dB per metre.

The rather nifty pH and conductivity probes, I used. (Thank you eBay!) 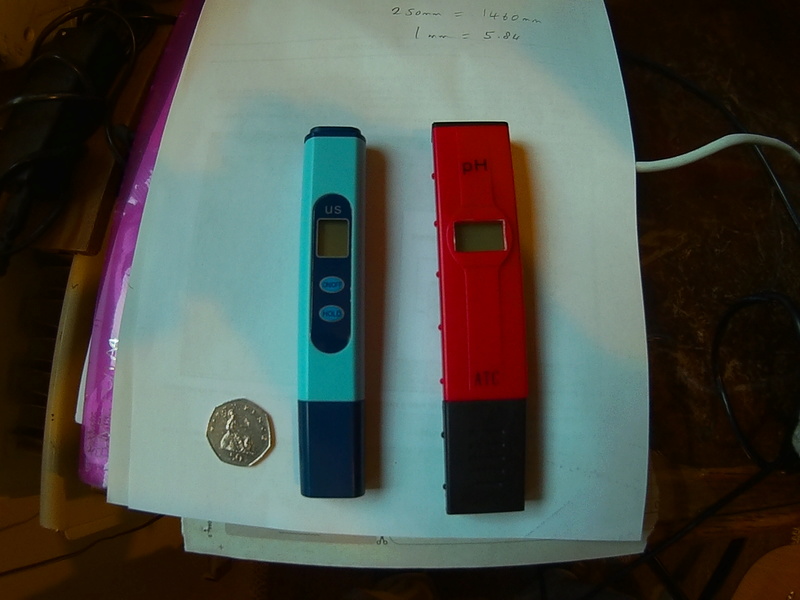 What a great posting! I learned a lot and am willing to acknowledge that I have held some misconceptions. Keep up the good work David!
_________________
If you can cut, drill, saw, hit things and swear a lot, you're well on the way to building a working model sub.
tsenecal

fantastic info David.... this is extremely helpful, and is just what is needed to figure out how well our subs will run at any given location... time to hit ebay
david f

A little more on the pool salinity story.

The conductivity of the pool water last Sunday was 724 microS with a pH of 7.36.

So similar results to the last visit and similarly poor radio reception at 458MHz. (No control at the bottom about half way along the pool. Rather reliant on fail safes !)

Paul's sub on 27 Mhz was controlling even at the deep end.