After trying fellow member John Wrennall's dynamic diving Graupner Shark at Norwich this summer and finding it great fun and quite challenging to 'drive' accurately, I decided to see if I could scratch-build something as a relief from the lengthy build of my perhaps over complicated T class Thrasher. After a quick rummage through my boxes of model bits and pieces and material stock piles I found that I had all that I would need. After bit of relaxed thought and doodling the best thing to do next was to start cutting and glueing stuff together, and after a few days I had a hull , and a couple more to make up some whirly bits at one end 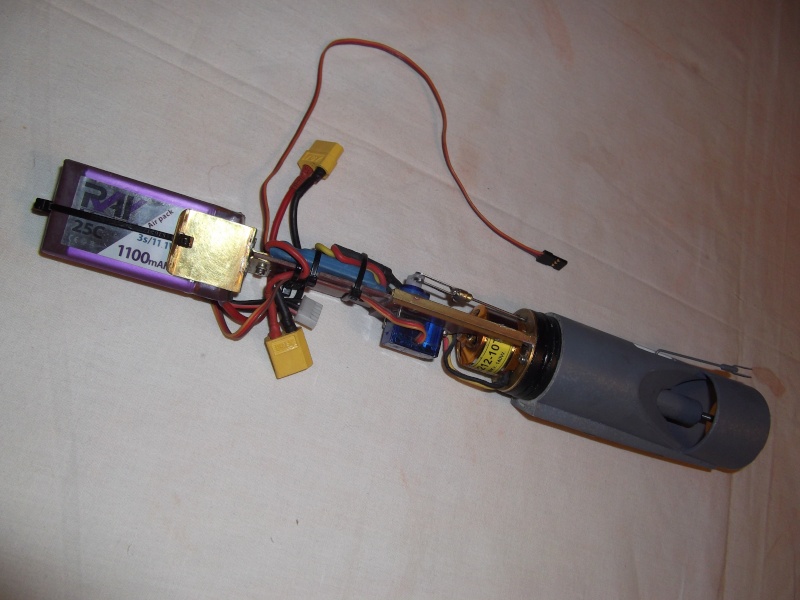 and wobbly bits at t'other, 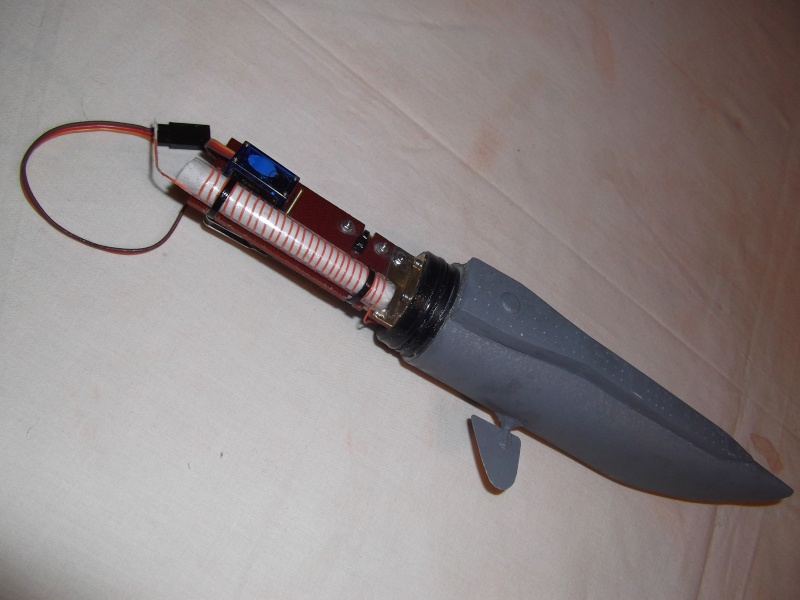 All a bit of a tight squeeze getting this lot into some scrap ABS 11/2" wastepipe, but I had model submarine. Well it looked like a submarine, and after comparing my doodled calculations and weighing the model I knew that if would just about float which was just right, so time to visit the test tank/ garden pond. Hmm! It does a nice impression of a dead fish was my first response as it floated with the starboard dive plane waving at the sky, a behaviour soon solved with the contents of a shotgun cartridge -  well lead shot anyway!  So here it is-- HM(S) Pipefish! 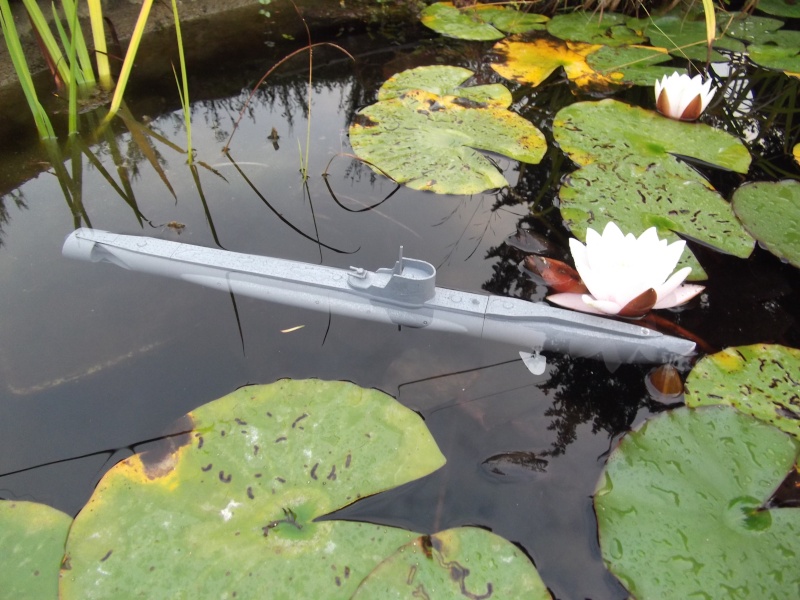 For folk interested, the Rx is Corona 40meg 4 ch and the aerial wrapped around paper tube still gives good range,the smallest motor I had is a 2208 outrunner, 1100ma,non reversing 3s Lipo, 20a ESC, cheapo 9 gm servos. Careful throttle management is required to avoid an interesting display of aquabatic  axial rolls!!

A couple of queries about your "Pipefish" if I may,

1. Is it steered by the rear nozzle which looks like its the same size as the hull and hence what size prop did you use?

2. Assembly appears to be pushed together over 2 'O' rings at each end, anything to hold the ends in?

3. Deck, sail and side tanks, are they solid or hollow?

Thanks for your interest and I'm happy to answer your points, after all, your Shark try-out was the inspiration!!

First up, the nozzle is fixed with an old 3 blade prop that started life at 1.5 but trimmed down to run inside the nozzle which is cut from the same scrap pipe as the rest of this creation. It's steered by a brass D shaped rudder behind the prop but within the nozzle. You can see the clevis and pushrod in the first picture, the tiller is made up from a ball from a ball link soldered onto a 2mm bolt and the clevis is a standard one modded by removing the pin and drilling out the holes to 3mm . I've added another here- 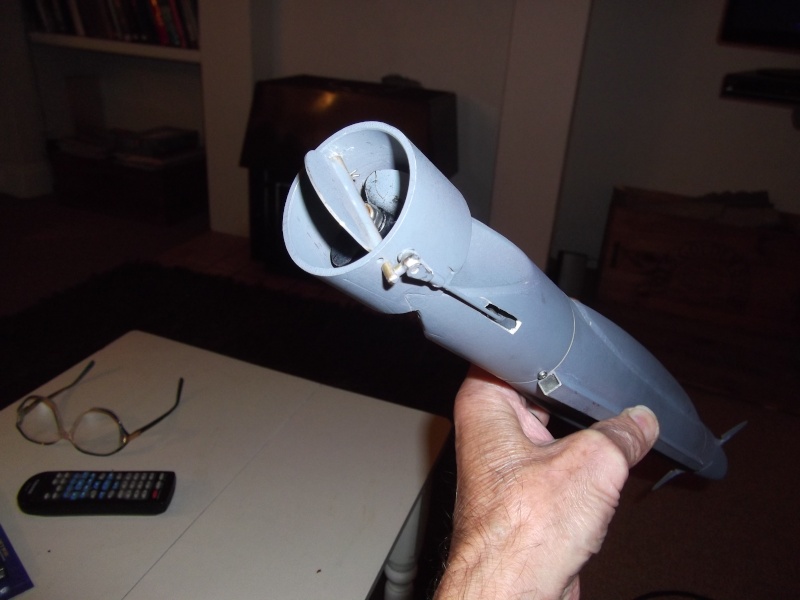 The delrin plugs are retained in the nose and stern free flooded sections by a 2mm screw through the keel, see above picture. A good tight fit of the O-rings hold the plugs into the centre hull. So far!

The 'casing' and the 'ballast tanks' are made from scrap abs cable conduit, rectangular and round respectively and filled with builders foam after drilling all the holes and welding/glueing onto the hull pieces. The only new bought in material was a length of 8 x 10mm styrene tube for the ballast keel, filled[mostly] with lead shot then plugged. The tower/sail is a piece of pipe cut lengthways and two flat arms formed with the aid of a hot air gun and this too is filled with foam to give some top buoyancy, similarly the bow section was shaped by cutting wedges out and hand forming under a hot air gun then weld the seams up.

Yes a lot of fun to make up from what was to hand the only prblem I had was that the first bow section that I tried was pvc pipe which is awful to weld or glue so that soon found where the trash bin was! It's fun to drive too, so far only in a couple of garden ponds, a friend's is a bit bigger than mine and I've yet to give it a proper 'go' up in Norwich- been a bit busy lately with domestic maintenance stuff.
I've got several bits of 3" downpipe scrap so I might have another go in a bigger size which should be a bit easier, though probably will make it a static diver,

Do you have a video of it in action?
Crossie

Afraid not Redboat!  the only vid. device I have is my old FlycamOne  that is dismantled at the moment waiting until I can find the time to splice in a new lipo. which I'll probably get soon as I want to go down to a 2s pack and also use some of the new XT30 connectors which'll take up less space/ be easier to stuff in,

Love your sub - but I'm biased when it comes to plastic pipe!

To glue pvc pipe I use Devcon Plastic Welder - works well for me.

Many thanks for all the bit and pieces from Norwich by the way!