» New Gyro On The Market

» openLRS and 2.4 Ghz and Submarines

» What motor to use

We have 860 registered users

The newest registered user is Uptona

I asked Paul Cook about the chipping and cracking of the gel coat on my X craft on our Facebook page, and in reply Paul shared some of his weathering tecniques with me, and how to cover up the damaged areas.

Paul kindly gave his permission to me to copy/paste our chat on here, for which I thank him...so here it is.

On my X (bearing in mind it was an original Darnell), they were moulded in better than that I have to admit. As to the cracking of the glass on the last few models I have built I turn that sort of thing to my advantage - try it!

Ok, that chipping of the gel coat, drop some thin cyano over it, but coax the cyano in a downward motion out of the cracks, (as if the cyano was the water running out of the floodhole) let it dry. When you come to paint it, you will find that you will have a rough surface, when you dry brush or even paint your rust on, it will be textured. Take a look at the hull of HMS Alliance at Gosport, you will see what i mean..

Now that's an idea, Paul, one I hadn't considered. I do like the ''rough and ready'' look, I will admit, I'm not into finishing my boats in pristine condition, I like them battered and beaten. Ok, I'll give your idea a try and see how we go...thanks mate, much appreciated.

Heres a close up shot of the Gato rear deck, just as the real thing, dented, bent, corroded panels. Not a nice shiny smooth hull. 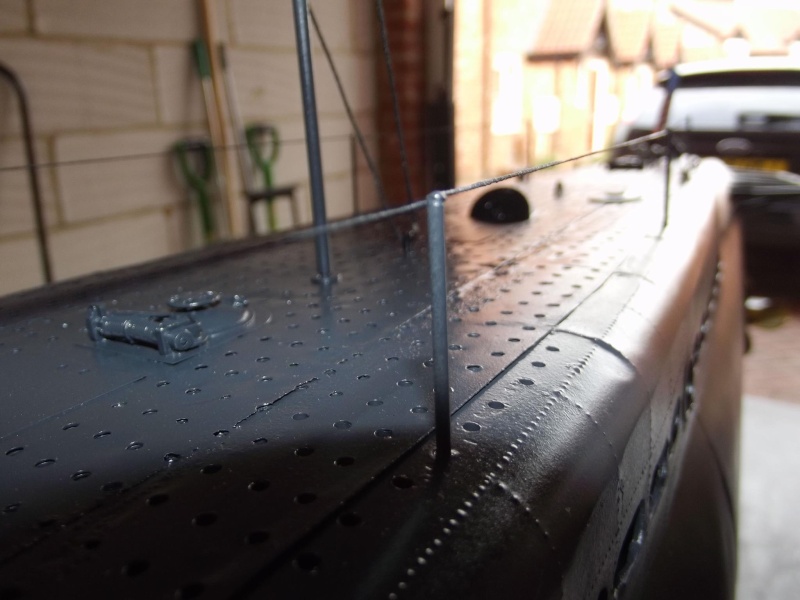 Now that I like, that's realistic...just how it should look. Nice work, Paul...very nice.

If you look at this shot, you will see the "corrosion" coming out of the metal in the rust pattern to the left of the shot, this was created by cyano, being applied and streaked in a downward motion, left to dry, then painted. Your X craft slots, will then look damaged, then corroded! 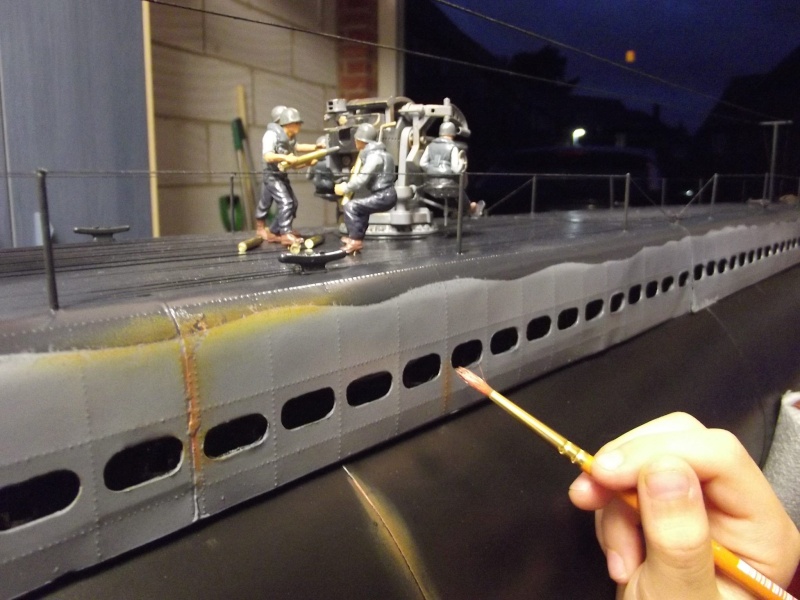 I see what you mean, that looks as though it's just survived a long patrol in the Pacific, with a few depth chargings as well. I like the idea, I'll try that tomorrow.

I've been playing with this technique for a few years now, but its something you can play with by adding more cyano, then painting, if too much, use wet an dry in a downward motion down the hull, this then gives the paint a totally uneven look.

It's bloody clever, it really gives a realistic finish, doesn't it? Much, much better than some I've seen.

Back in the late 80's when I built Satyr, I just weathered it, but as most of family live in Lowestoft, frequent visits and walking past the harbour enlightened me to the fact that sea rust on ships, is not flat, smooth or just painted on. Its totally random, it rough, various colours of orange, red, brown. - Where the hell Humbrol got their idea for their "rust" paint that is nearly purple I have no idea. I've even go so far as getting pieces of steel can, cut up, stick it to fibreglass, and not paint it all! Then see what happens.

Paul did ask that I add this comment to the posting..."make sure all practice and practice it again before applying to models".

And I will add Nigel's comments..."be careful when using cyano glue in a confined space, the fumes can affect your breathing, especially if you suffer from lung problems. Work by an open window, and if possible, keep a small fan circulating the air around the work area."
david f

Re: Paul Cook's ideas on weathering.

All this information on weathering is really useful.
I can see a whole crop of weathered models, next season.

Re: Paul Cook's ideas on weathering.

I plan to give the X craft a weathering job using a mixture of Paul's and David's methods...it was suggested that due to the fact that X craft didn't make long patrols, they wouldn't really have the chance to get rusty and dirty, but I'm not too sure about that, and anyway I like a good weatherbeaten look to my boats.