Yesterday at 10:07 am by geofrancis

We have 957 registered users

The newest registered user is wimalopaan

This is quite interesting.

This is quite interesting.

A Kittredge K-350 design. The number designates the diving depth the boat is good for in feet.

I believe they make these from tanks designed for gas storage. People knock them up in their garages and dip them in large lakes- they even have an annual convention in the states.

An earlier and smaller design by Kittredge called the K-250 caught my eye a while back.

I found a simple drawing, with some basic details and a rough photograph. Later on I discovered a lot more photographs of this class of boat. At 1/8th scale I could use bog standard 110mm PVC waste pipe for the hull. I turned up some masters from MDF for the front and rear sections, made plaster casts, and laid them up in GRP. These parts could also be used for a myriad of other submersible types. The eagle eyed will spot I got the shape slightly wrong in places, this owing to the poor quality of photograph I had initially. However since every boat of this type differs in some way, I think I have some artistic license.

Need to take some more pictures of the other parts of this model I've built. Here is a brief description-

The model is a handy size at about 14" long. But the large scale and chunky dimensions make access easy.

The project hit the buffers when I sat down to think about a simple way to make the thrusters and get a scale appearance. Most people cheat with these, and just use oversized motors, which looks awful IMO. I fancied running the props through bevel gears, with the larger motors inside the main pressure hull, but finding some bevel gears small enough proved a chore.

In the end I've settled on some from SHG, which give me slightly above scale pod thrusters, but which look the part.

I've made a turret from PVC pipe heat formed to the correct diameter around a wooden former, using a jubilee clip to keep it in place whilst a wafted a hot air gun over the PVC to lock it in place.

For the dome a standard 75mm item from EMA's does the trick. Skids have been fashioned from brass sheet and soft soldered together, and the rudder from G10 epoxy sheet (also known as 'industructonium').

Currently head scratching about a ballast system. For a small model it displaces a lot being a dry hull, and needs about a 300 ml tank! The original features three ballast tanks, forward, aft and trim tank in the centre. That could prove challenging and I favour a single tank if possible.

That's very nice. So you are building again or is it an old project?
Guest

It's an earlier project revisited. Those are very early shots of the first pulls.

Here's a picture of the brass skids I made up. Should help to keep the weight low, and they should take a clonk.

I am going to mill some slots into the PVC cylinder and bond them in with some Fusion glue.

Got a little more work to do on the pod thrusters before I start work on the guts of the boat. 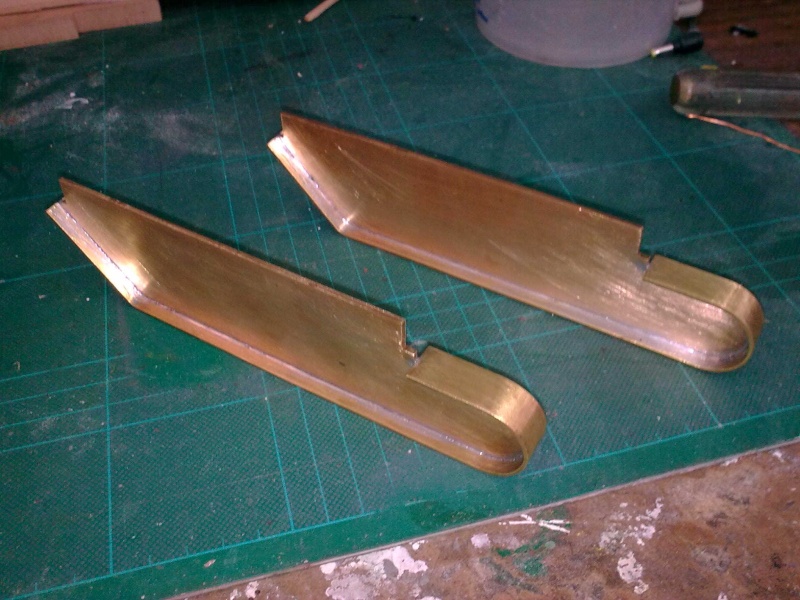