Today at 1:34 am by geofrancis

» Pinger 4 - A simpler design for an ultrasonic Pinger which gives an accurate 1 second pulse.

We have 935 registered users

I have mentioned this book before when I posted about John Lambert plans last August.

A lot of other things have got in the way of my promised review and so I have only just got up to the end of the First World war.

I will give a full review when I finish the book but I think that David Merriman's recommendation of Norman Friedman is justified. This has to be THE book for anyone interested in the history of British submarines.

It is not just the welcome inclusion of John Lambert's plans but the depth of Friedman's research. He has gone back to the original sources and gives a fresh perspective of British submarine developments. Interesting that, unlike many authors, he is quite positive about controversial classes like the K and M. I suppose it is easy to be wise after the event.

Re: British Submarines in Two World Wars by Norman Friedman publ by Seaforth.

The fact that it has taken me several months to read the book points to a problem if you want a quick, easy read!

It is an excellent book which comprehensively deals with British submarine development in and between the world wars. It's worth buying just for the photographs and drawings alone.

But in addition, Norman Friedman has gone back to original sources (Mostly "Covers" held in the "Brass Foundry" section of the National Maritime Museum in the UK.) to comment on the thought processes of the Admiralty.

He dispels the "Dammed un-English weapon" story by showing that RN were very actively monitoring submarine development at the turn of the century. (A shame that Hunley is misspelled as Huntley on Page 8 !) By the end of 1914 the RN had the largest submarine fleet in the world.

He shows that the RN were very innovative in submarine development e.g the anti-submarine R class of WW1 and the development of the Fleet submarine in support of the battle group. (He treads lightly on the problems of the K class! Innovation often bears a heavy price.)

Post WW1 development was shaped by arms development agreements and by the need to provide submarine forces for a global Empire. (Interesting that he finds that no sooner was WW1 over before the RN anticipated a conflict with Japan in the Pacific.)

ASW (Asdic & Sonar) are well covered as is the development of the submarine classes which were active in WW2.

A fascinating section covers the RN reaction to the German development of high speed submarines (e.g the Walter Turbine). The pre-Enigma version of events is that Britain only became aware of these developments following the invasion of Germany in 1945. In fact Enigma intercepts had alerted the British by early 1944 and they started to work on counters for high speed submarines including the conversion of the Seraph into a high speed target submarine by Autumn 1944. (This was before the German Type XXI had made any operational cruises.) Satyr and Sceptre were also converted in 1944 and the conversion of Scotsman was started. (She eventually had an underwater speed of 15 knots. Shame about the R class development cul-de-sac!)

The book also has interesting and useful appendices on Radio, Midget Submarines (including the chariot) and Export submarines.

For anyone interested in British submarines this book is a must and will look good on your shelves. (It is in coffee table format which means that the drawings are a decent size.)

Re: British Submarines in Two World Wars by Norman Friedman publ by Seaforth.

A small sample (restricted for copyright reasons) of one of the drawings in the book: 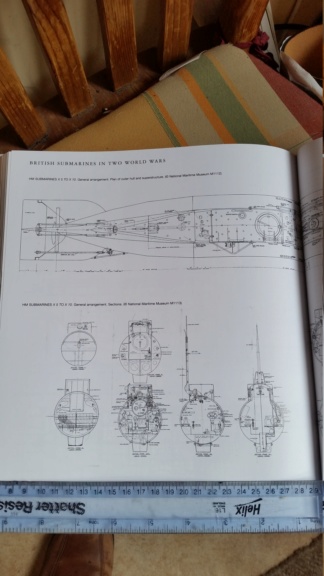 I purchased this book two weeks ago. And I must say that’s it’s a great read. If you are interested in the history and types of British submarines of the period it’s a must have.