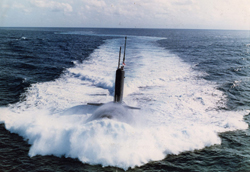 As promised some time ago, please find attached a description of a tour over HMS Courageous that I made during the summer.

If you are happy with the article, please feel free to add it to the website.  My user name is "Sonar Ping" 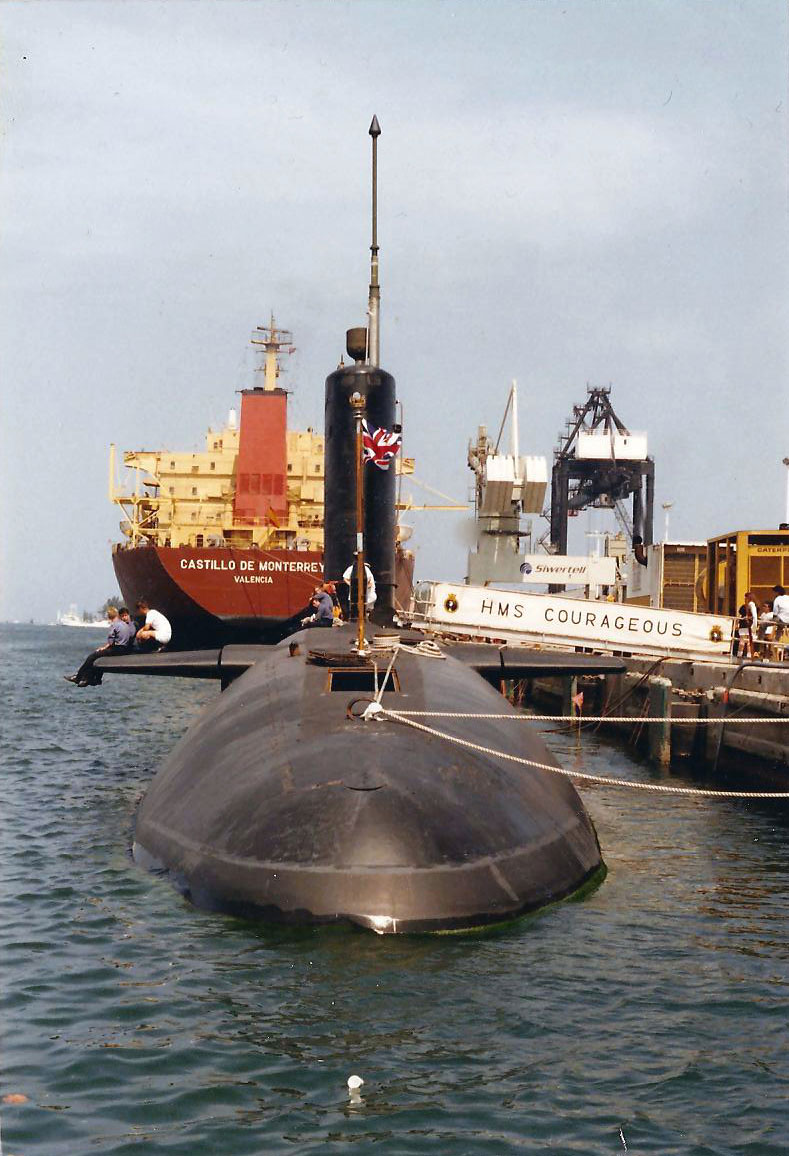 During the summer I found myself down at Plymouth Devonport and discovered that it might be possible to visit HMS Courageous at the Devonport dockyard.  Since this is an operational naval base, one cannot just turn up and ask to be let in!  I had to telephone the Devonport Naval Heritage Centre and give them my name and contact details to obtain security clearance.  They then telephoned me back about a week later saying that I had been cleared and that my wife and I could visit the submarine the following Monday.
In all there were 19 people in the tour party.  We were first loaded on a coach and driven through the dockyard to where the submarines were.  The first surprise was that there was not one submarine, but twelve!  These are all waiting for decommissioning, except for HMS Courageous which has been defueled and can be toured.  Of the 12 submarines, four have had their fuel removed.  The remainder are still fuelled.  Alongside Courageous is Conqueror which sunk the Belgrano.
The tour of the submarine was with a guide.  Unfortunately we were not permitted to take photographs either inside or outside of the submarine.  We were also not allowed into the aft part of the vessel astern of the Control Room.  This was due to an agreement with the US that non-essential people would not be permitted to see any part of the reactor.  Even so the visit was very interesting.
Courageous was launched in March 1970, commissioned in October 1971, and finally decommissioned on April 1992.  She was the third in the Churchill class of nuclear SSNs (hunter-killers).  The Churchill class was the second class of SSNs after the Valiant class.
It is interesting to compare Courageous’s principle characteristics with a conventional submarine, for example Alliance displayed at the Submarine Museum, Gosport:

Although the two submarines are about the same length, Courageous’s beam and draft are 50% greater.  This allows Courageous to have three decks whilst Alliance has only one.  The extra deck space permits more equipment to be installed.  Also since nuclear powered vessels are at sea longer than diesel, extra stowage for provisions is required.
Despite not being able to go aft of the control room, the tour was very interesting and gave me an idea of how much more spacious this was compared with Alliance, for example.  This does not mean that there was proportionately very much more room, but at least all regular crew members were allocated their own berth.  Hot bunking was still required when extra crew work on board.  Also, because of the extra crew required for the reactor and more sophisticated sonar and weapons systems, the complement is nearly double that of Alliance.
We were guided through the submarine by an ex-submariner who had served on Courageous.  The tour commences in the Torpedo Compartment.  Courageous had six torpedo tubes in two rows of three.  The Forward Escape Hatch was located in the Upper Torpedo Compartment.  Continuing aft we passed through the Senior then Junior Rates bunk spaces and messes.  The common galley was located between the two messes.  There was also a dumb waiter which supplied food to the wardroom on the deck above.
The galley, catering for over 100 men, in three separate messes, was no bigger than a lot of family kitchens.  This emphasises how cramped conditions are on the boat.
Beside the wardroom, Deck 1 contained officer’s cabins.  The commanding officer was the only officer having his own cabin. Aft of the officer’s quarters was the Control Room.  This was divided longitudinally into two sections.  The starboard side was used for ship control and the port side for tactical and operational purposes.

The Ship Control and One Man Control system on the starboard side was manned by two ratings; the left hand one being a Senior Rate controlling the after planes and the right hand one being manned by a Junior Rate controlling the fore-planes and steering the submarine.  Behind the planesmen’s position is the System Console which was manned by a technical Senior Rate.  He controlled the high pressure air system, the hydraulic systems, trim, ballast, raising and lowering the masts and periscopes in the fin, operating the main vents, and blowing the main ballast tanks.  One wonders what the rest of the crew did!  The men were supervised by the Ship Control Officer of the Watch who stands in a bandstand that gave him oversight of the operation of the boat.
The third deck under the Senior and Junior rates bunks and mess primarily contains a mix of ship systems and live support functions including Ships Inertial Navigation System, gyro compass, CO2 scrubber, LP blower, radar and WT offices, electrolyser (for making oxygen), oxygen candle store, health physics laboratory, dry and refrigerated stores, and laundry. 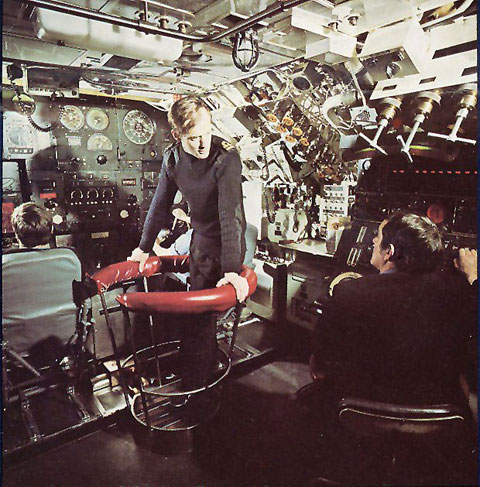 Aft of the Control room was the Reactor Compartment which we were not allowed to see or pass through to the machinery space.  However, a general description of the Propulsion system can be given.  Power is generated in the form of heat in a single nuclear reactor which is cooled by high pressure water.  The water is pressurised to stop it boiling. The reactor is cooled by two independent cooling loops, port and starboard.  Each loop feeds a steam generator where the very hot water from the reactor heats water in the steam generator which operates at a lower pressure and is therefore converted to steam.  The steam from each generator drives a turbine and the condensed water is returned to the steam generator to be turned back into steam again.  Output from the port and starboard turbines goes to a common gearbox which in turn drives the single multibladed, highly skewed propeller.
The port and starboard cooling loops provide redundancy so that the reactor can be cooled and the submarine can still sail if one of the loops is shut down for any reason.
The tour ended at the Control Room.  The submarine is fitted out with life-size models to represent some of the crew in strategic locations.  Other artefacts are located to give an impression of how it was to live on board. 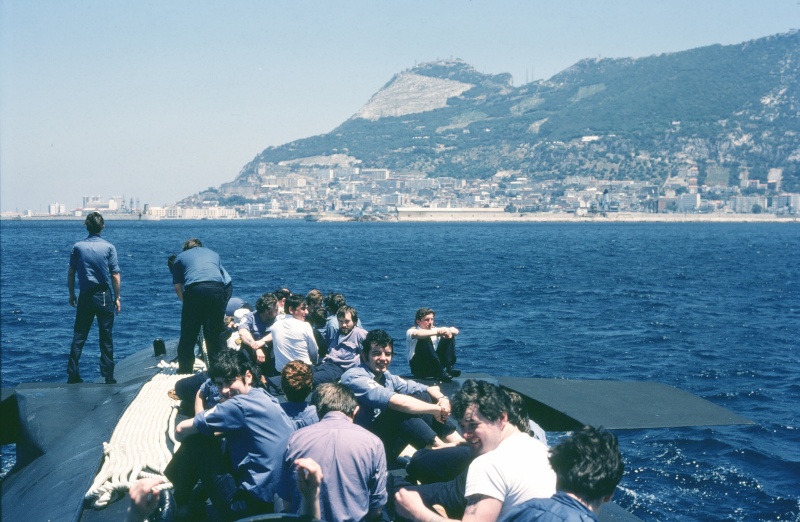 The tour is free and is very interesting for both people with a specific interest in submarines, and people who have a general interest in how men operate in such a confined space for very long periods.  I can thoroughly recommend the tour to other model submariners.  Just remember to contact them at least two weeks in advance.
The tour came alive because our guide had served for several years on this submarine and his obvious enthusiasm and anecdotes thus made for a lively and informative tour.  My wife enjoyed it too and felt it was worth the effort of climbing up and down all the ladders involved.
A couple of specific points may be of interest to modellers to make the next model more authentic and more closely following the original.
Courageous has three forward and three aft Main Ballast Tanks.  These tanks surround the reduced diameter of the pressure hull at either end.  Numerous other, smaller, ballast tanks are used for quick diving, trim and compensating.
Diving is effected by opening the main vent valves on top of each ballast tank.  These are controlled from the Systems console in the control Room.  The forward hydroplanes would be set down and the after hydroplanes would be set up.  With the forward motion of the boat the hydroplanes would drive the bow down and the stern up.  The boat would dive to about 30 metres and then rock back and forward to displace any remaining air in the ballast tanks.  The main vent valves would then be shut in preparation for later surfacing.
After all the air had been displaced from the main ballast tanks, the boat trim would be adjusted so that it was neutrally buoyant at the prevailing conditions.at low speeds submerged, the forward hydroplanes are used to control the submarine depth and the aft planes to control the fore and aft attitude of the boat.  At high speed, the fore-planes are set and fixed with 5° of dive and the submarine is controlled using only the after planes.

We are very grateful to the HMS Courageous Association for granting the AMS permission to use the photographs. Have a look at their excellent website on:

(Many more photos in their archive including construction photos.) Cheers chaps! 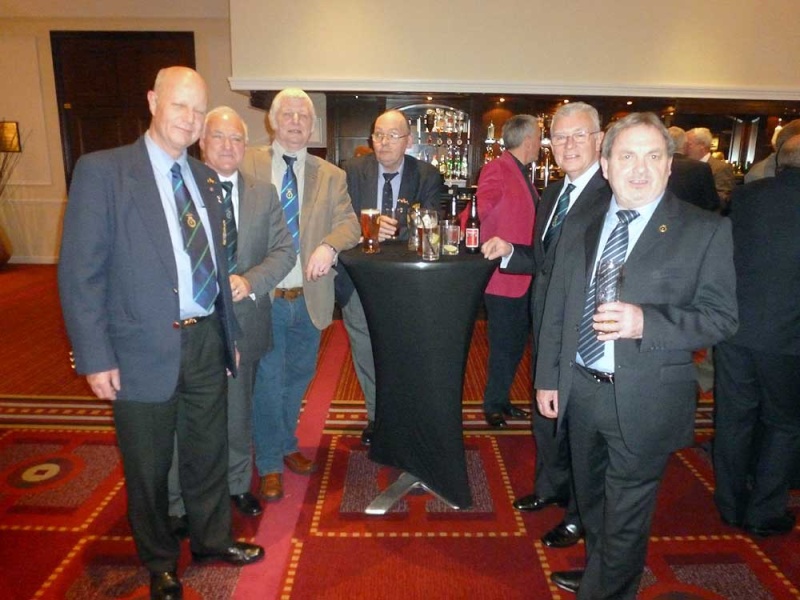 Richard would like to mention this link which is needed to book the Devonport tours: 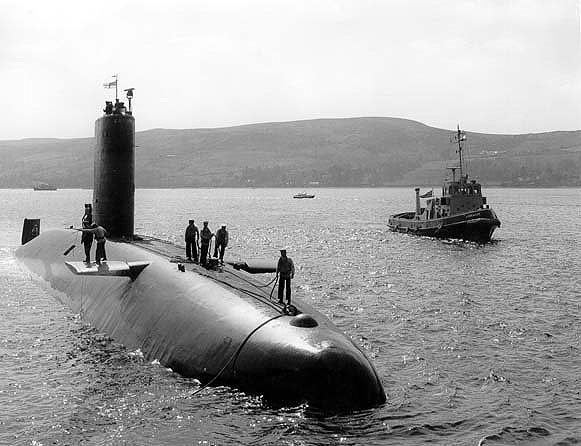 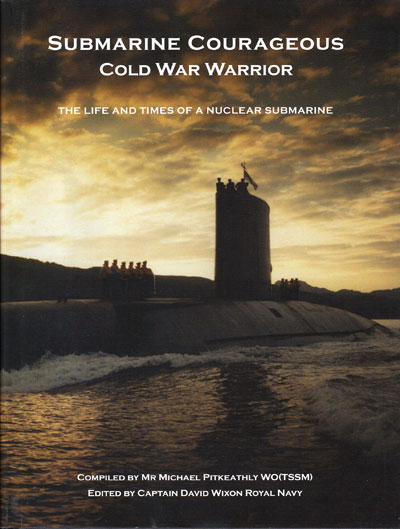 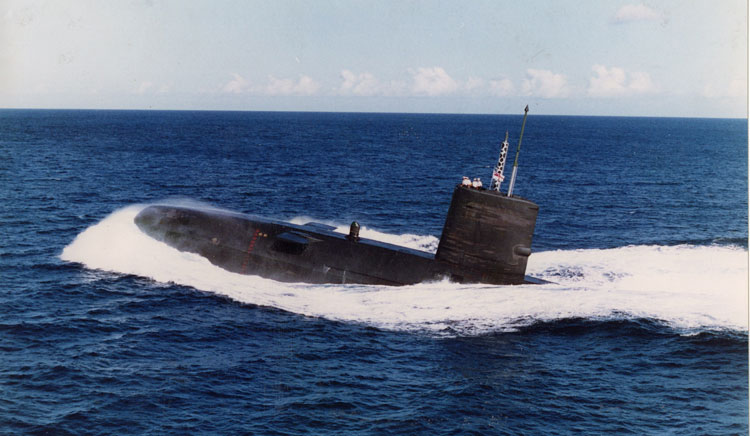 Many thanks for the excellent article, Richard and I hope we did it justice!
David
Kevin D

Thanks Richard for sharing your visit with us through this excellent article, I must add this tour on my things to do list.

Visited HMS Alliance last summer.......after reading your nice article on the HMS Courageous there will be a detour towards Plymouth on my next visit to the UK. (after making the telcon to Devonport tours)